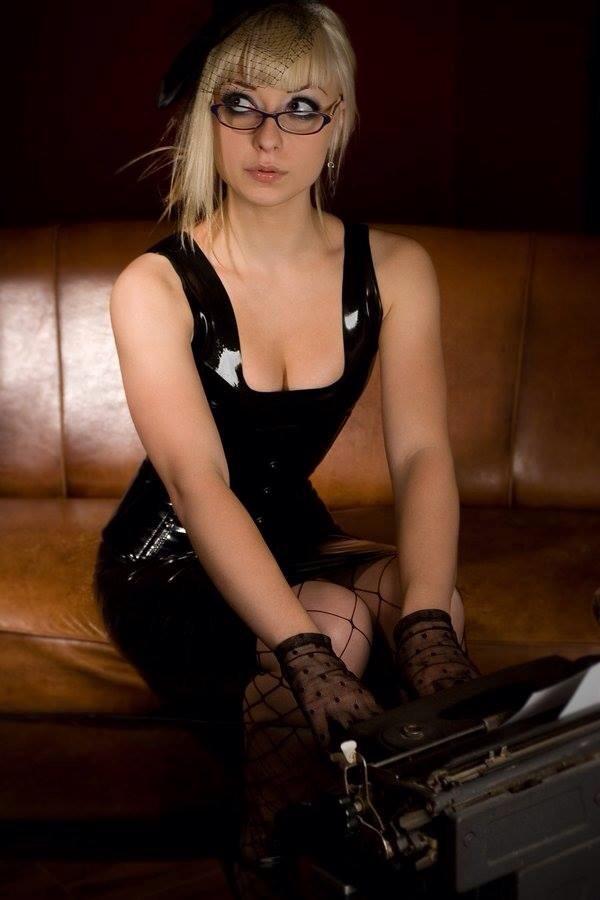 I made one little mistake – I let the wrong person know my secret. And I was subsequently blackmailed, transformed, and tormented by the men in my life because of it. This went on for several years and I was pretty much a mess by the end of that ordeal, but I’m slowly becoming whole again. My stories; the ones that taunt you, tease you, and turn you on are born of my own personal tragedy and the twisted imagination that resulted. And I’m okay with that. They are my own personal brand of therapy and release, and if they can bring you pleasure then they serve two purposes, and I’m happy to bring you such joy.

I know what you’re thinking: Just who is this sassy little minx behind the stories that coated my laptop with gravy. Well, I can tell you I am never what anyone expects. I write with much more confidence than I have in person. In reality, I’m just a mousy (some say cute) nerd grrl born and raised in Riverside, California with a compulsion for turning boys into girls. If you’ve read any of my stories prior to reading this you know I have a pretty twisted imagination. There’s a reason for this. I am what some might refer to as damaged; broken; one too many blows to the psyche. I’m a nut case. I’m aware of this and in my attempts to correct the situation I uncovered something useful… and fun….

At the behest of both my therapist and my boyfriend at the time, I started writing – mostly as a catharsis. To try and purge my inner demons I began writing a factual account of what happened to me in High School – an autobiography of sorts, but it was way too painful. I couldn’t read what I wrote without getting angry. So, my therapist suggested that I try to write something more along the lines of a fictionalized version. I don’t think she anticipated me skidding off the path into erotica, but that’s where it led me, and so my fictionalized semi-autobiography became Never Wanted To Be Your Girlfriend – I had to change the names – including mine, and make it age appropriate, and compress some things to fit into a story that takes place in one year of High School to an 18 y/o, but for the most part it’s accurate… minus the story devices used to compress the tale into such a short period of time. Anyone who has ever undergone HRT knows that the changes don’t happen that quickly or drastically. We all kinda wish they did though. 😉

Porn Princess was my first creative work that was any good. It was the first time I had really stepped outside myself, and had successfully written something that wasn’t totally about me, and that had a fully developed story arc. I love abusing Kendra. She’s my personal vicarious fuck toy. I do things to her I can only imagine happening to me in my dreams and nightmares. I used to work for a boutique porn company as a receptionist, and I spent enough time around there that I garnered a general understanding of how the biz works, so I just used my knowledge to create a fun backdrop for the story. Conversely; “Lesser” was my very first attempt at erotica. I had tried writing it before the big therapy experiment. And I had failed miserably. It was terrible, and I abandoned it. But after NWTBYG and PP, when I finally got a sense for how to write, I went back and rewrote it, and it has since become one of my favorite stories. I had originally intended to make it a series, but I end up scrapping every chapter I write as they never seem to match the intensity of the original. So it seems to forever be a one-off.

Other than writing – I occasionally DJ at different clubs around LA. If the DJ at your club is a 5’7″ pink, purple or blue haired latex clad dynamo that dances like mad to her own spins and never acknowledges your presence, then there’s a good chance it’s me – I love to dance! (FYI the brightly colored mane is a wig… I’m a blonde underneath. I started dying it just after my surgeries so as to further distance myself from the girl I was in HS.)

I do a lot of cosplay at places like Comic-Con, Wondercon, and Anime-con (I found that I don’t like to travel far from home… at all, so only California based events from now on). My all-time fave costume is Stephanie Brown – Batgirl. It took me forever to get it right. I had to get a neck-to-toe cast made of my body, in order to fashion it cuz it’s made of form fitting latex, and being locked inside all that plaster was as terrifying as it was thrilling. The end result was totally worth it, though. I love that the mask hides my identity completely. When I unveiled it at Con, none of my CosPlay friends knew it was me until I spoke and told them. But like I said before, if you “unmask me” at a con, don’t be surprised that I’m really shy around people I’ve just met… painfully so and to a fault. I’m not trying to be rude, I’m just really fucked up. I never know how to act around new people, so I hide behind my writing, and my costumed characters. See also the link from before on my stupid shyness problem.

I’m now a 28 year old non-op Transgirl, who lives full time here in West Hollywood. I’ve been on hormones (officially) for 10 years. I love being girly, but I don’t ever want to have a surgically constructed vagina. Annnnnd, that about sums me up.

Oh, and for those who love Easter eggs, one of the pictures on this site that I swear up and down isn’t me, actually is me…unmasked. Only I’ll never reveal which one it is. Have fun with that one.